The Peruvian Retablo is the result of a melding of European and indigenous customs. These gaily decorated boxes containing multi-figured scenes have antecedents in rites, customs and traditions of both the Iberian peninsula and the Andean highlands. Once the Spanish had militarily conquered the Incan empire, they campaigned to convert the native populace to Christianity. One of the Spanish customs assumed by the indians was of the portable shrine. As it evolved, this form of box-like ratable came to contain some of the powerful figures of Spanish catholicism, such as the virgin Mary and st. Mark. The boxes’ figures are fashioned out of homemade modeling clay, which is composed of gypsum, yucca flour, wood, glue and white chalk. 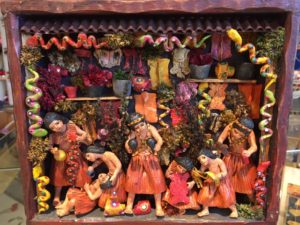